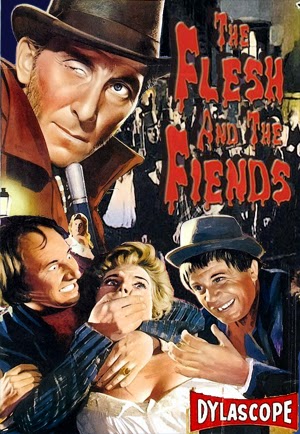 We begin Peter Cushing Month II with one of Cushing's more often overlooked films. Though strictly-speaking not a horror film, 1960's The Flesh and the Fiends was certainly marketed like a horror film, and released in America under the title Mania. Nevertheless, the creepy costume drama boosts one of Cushing's finest early '60's character parts, and he just about steals the show. So, without further ado let's dive right in and take a closer look at The Flesh and the Fiends.

Edinburgh, 1928. Dr. Robert Knox (Peter Cushing) is lamenting the difficulty of obtaining bodies for dissection in his anatomy class. This leads Knox to turning to body snatchers who despoil graves, digging up their occupants who eventually end up on the Doctor's operating table. The lucrative trade of the body snatchers draws the attention of William Burke (George Rose), a down-on-his-luck landlord, and his friend William Hare (Donald Pleasence). Burke and Hare develop an evil scheme quickly: why dig up graves when they can provide Dr. Knox with fresher corpses...freshly murdered corpses. Turning a blind eye to the killer's activities, Knox tries to evade the authorities' investigation as well as the crisis of his aid Chris Jackson (John Cairney) who has fallen in love with a barmaid, Mary Patterson (Mary Whitelaw). Will Knox get away with his schemes, or will the misguided scientist's actions soon prove to be undoing...?

"This the story of lost men and lost souls," reads the caption which opens The Flesh and the Fiends. "It is a story of vice and murder. We make no apologies to the dead. It is all true." The fact that this film is based in truth is perhaps one of the most interesting things about it. Burke and Hare, real people, who did indeed begin robbing graves and later turned to murder, did exist. Their heinous crimes would go onto influence many writers and storytellers, including Robert Louis Stevenson whose short story The Body Snatcher is in part inspired by their crimes. Burke and Hare have since entered into popular culture, attaining the same grim status as Jack the Ripper.

Despite the film's claim that it makes "no apologies to the dead", the movie does handle its subject matter fairly delicately. And that may actually be the film's main weakness. George Rose and Donald Pleasence are great together as Burke and Hare, but they never seem quite evil enough. Pleasence in particular gives a grand performance, but in a film which relied on its melodramatic (but true) subject matter, a more grandiose performance from both men could have accentuated their characters' un-likability even more. Again, that's not to say that they were bad, but there was potential for more.

However, as usual, Peter Cushing must be praised for his role of Dr. Robert Knox. Despite his star billing,Knox is a fairly minor character, especially as Burke and Hare take centre stage. However, Knox is one of Cushing's finest performances of the early-'60's. Knox is the epitome of the misguided scientist who disregards all in order to better science. Cushing based his performance of Baron Frankenstein in his numerous turns for Hammer on Knox,and the parallels are quite visible. Both men are cold and aloof, science governing their minds over all. Cushing also allows Knox to grow as a character, something which is fairly infrequent in films of this kind in the period. As Knox begins to realize what trouble he has gotten himself into, Cushing makes Knox a far more redeemable figure, one we can almost sympathise with come the finale.

As I noted above, The Flesh and the Fiends is not really a horror film. If is without doubt a creepy, dark film, but The Flesh and the Fiends is truly a costume drama. Impressively mounted, the cast is extensive and the sets are beautifully-designed; Knox's lecture hall is a truly impressive set and Cushing looks quite at home behind his podium. That's not to say that there aren't some horrific moments especially towards the end as Burke and Hare's bloodlust overwhelms them and Knox begins to targeted for his complicity in the two men's crimes.

The Flesh and the Fiends was more-or-less remade in 1985's The Doctor and the Devils based on an original screenplay by Dylan Thomas. Jonathon Pryce and Stephen Rea starred as Burke and Hare equivalents Fallon and Broom and Timothy Dalton took on the role of Dr. Thomas Rock, a substitute for Knox. The film was directed by Hammer horror veteran Freddie Francis. More recently, Burke and Hare would also turn up in John Landis' dark comedy Burke and Hare starring Simon Pegg and Andy Serkis as the killers with Tom Wilkinson taking on the part of Dr. Knox.

The Flesh and the Fiends is a flawed, but ultimately overlooked film together. Excellently realized with lavish costumes and sets, the movie is complimented by a fine cast. Donald Pleasence and George Rose provide a good turn as Burke and Hare, but Peter Cushing easily steals the show as the misguided Knox and manages to give one of his strongest performances of the period. The Flesh and the Fiends gets 3.5 out of 5 from me. Make sure you check back regularly as I continue to review some more Peter Cushing films as I once more celebrate Peter Cushing Month.
Posted by Nick Cardillo at 3:46 AM