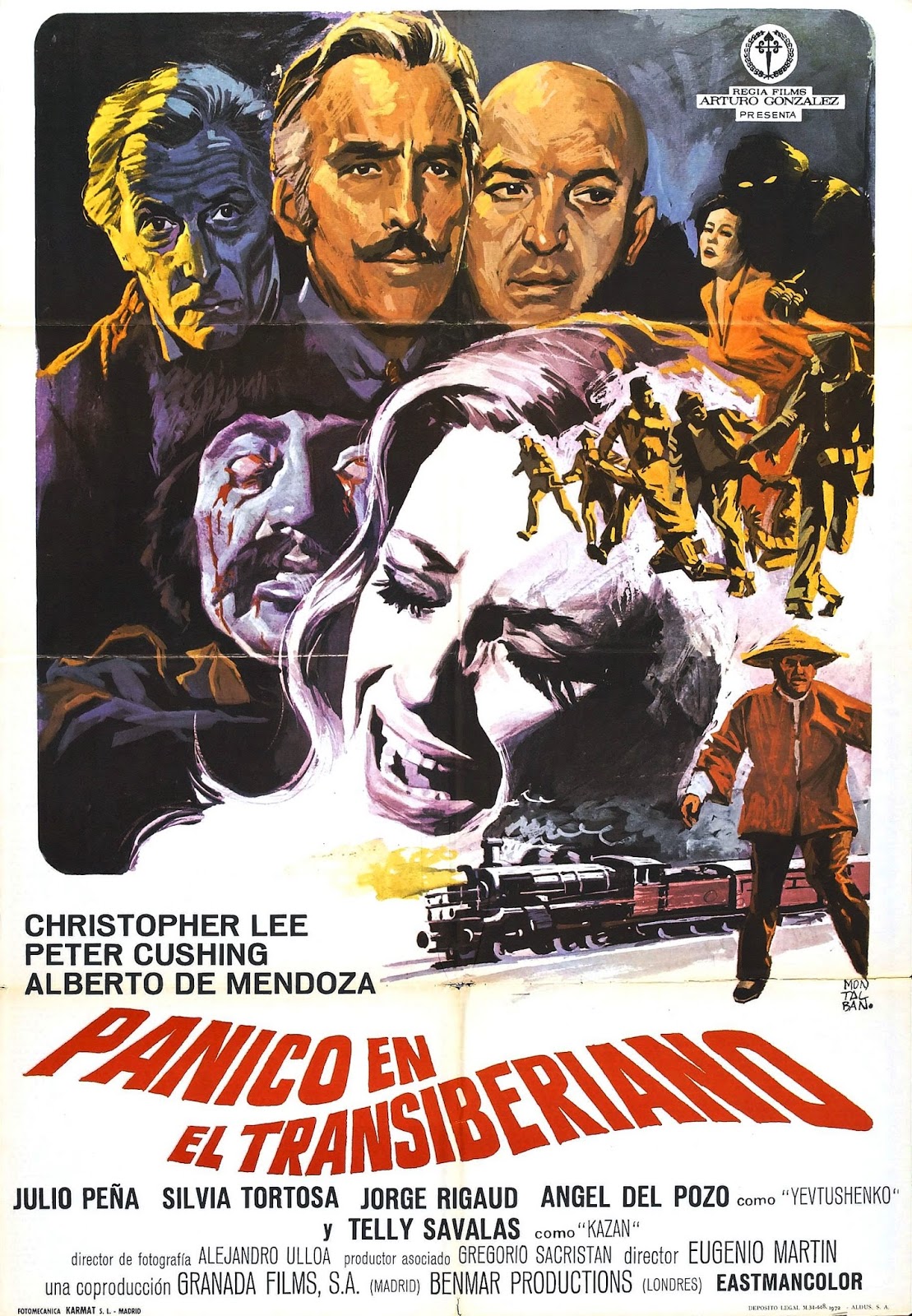 Despite the fact that British Hammer Films paired Peter Cushing and Christopher Lee on a number of occasions, it was a small Spanish studio who paired the two in one of their most memorable,exciting, and truly unnerving horror films. Originally entitled Panico en El Transiberiano (Panic on the Trans-Siberian Express), the film was ultimately re-titled in English-speaking countries as Horror Express. The excellent film is the subject of today's review for Peter Cushing Month.

In the early 1900's, Sir Alexander Saxton (Christopher Lee) discovers a neolithic creature encased in ice while exploring the caves of Manchuria. Placing the creature in a crate, Saxton plans on traveling back to Europe across Russia on the Trans-Siberian Express where he runs into his rival, fellow anthropologist,Dr. Wells (Peter Cushing). Before long it becomes clear to both men that Saxton's specimen is not dead and is now running amok on the train - it's glare able to kill a man. A race against the clock is soon on as Saxton and Wells must stop the monster and discover the creature's secret.

On a personal note, I discovered Horror Express a many years ago when I came across it in a video store. Fascinated by both Lee and Cushing, though arguably pretty unfamiliar with the bulk of their work, I decided to give the film a try. Being perhaps of an impressionable age, I found the movie incredibly chilling, and I daresay I had never seen a movie which caused me to lose sleep. More recently, I discovered that the film was restored on Blu-Ray (and believing that I am not as impressionable as I once was) jumped at the chance to see the film again. Boy, am I glad that I did. Horror Express is without doubt one of the strangest horror films I have ever seen, but such a fascinating, entertaining film, and even after all this time, still pretty unnerving.

Horror Express can be looked at as one of those "kitchen sink" horror films. In the span of a 90-minute movie, we have: an Edwardian setting, a speeding train, a neolithic monster, a creature from beyond this world, zombies, blood, gore, Christopher Lee, Peter Cushing, a pretty countess, a Rasputin-like mad monk, an incredibly eerie musical score, and Telly Savalas. I'll give you a second to let that all sink in. Ready to continue? Good. Despite the combination of eclectic plot points, the film succeeds in making everything work. Never do any of the sub-plots or characters feel superfluous - they all add greatly to the overall story. In fact, Horror Express' greatest asset is its very original script, written by Arnaud d'Usseau and Julian Halevy. While the film begins in the usual monster-on-the-loose vein, by the mid-way point, an interesting twist has been introduced and the whole film is truly turned on its head.

The excellent screenplay is complimented in no small part by its stars. Christopher Lee heads up the cast as Sir Alexander Saxton. Lee gets to play a heroic character in the film, an occurrence which was fairly uncommon in '70's horror films. He lends true weight to the (at times silly) story and the seriousness with which Lee conducts himself adds gravitas. Peter Cushing's Dr. Wells is one of the actor's most endearing creations; even in the scenes in which Wells is experiencing the most dire of circumstances, Cushing's eyes cannot help but twinkle. What is notable about Cushing and Lee in this movie is that the two of them are both agents of good, easily setting aside their differences to save the day. Both are also endowed with some very campy bits of dialogue, but both actors, ever the professionals never let the audience see them make light of their faintly comical lines. For example, after Saxton's creature has broken out of its crate, killing the train's baggage man, Wells demands: "are you telling me that an ape that lived two million years ago got out of that crate, killed the baggage man, and put him in there, then locked everything up neat and tidy and got away?" to which Saxton steadfastly replies: "Yes, I am." Perhaps the most infamous case of unusual dialogue to be found in the film comes after Julio Pena's police inspector accuses Saxton and Wells of possibly being the monster themselves. "Monster?" Cushing's Wells counters, "We're British you know."

The supporting cast compliment Cushing and Lee wonderfully - if not at times achieving a memorable status with a bit of zealous overacting. Alberto de Mendoza walks away with perhaps the film's most memorable role, that of the mad monk, Father Pujardov, who goes a little off his rocker come the film's final third. Silvia Tortosa is likable in the extreme as Countess Petrovski, and any possible romance between the Countess and Saxton is well-handled. One cannot overlook the obvious elephant in the room, that elephant being Telly Savalas as cossock Captain Kazan who attempts to restore some order on the train. Savalas hams it up in the extreme, seen gargling with a glass of vodka. It's an insane performance, totally in-keeping with the nature of the film. 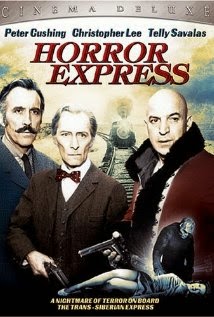 Despite its at times campy nature, Horror Express still manages to be an unnerving film. Due in no small part to the sense of claustrophobia, the sense of tension in the film is produced almost effortlessly. Unlike Hammer, whose scenes of extreme gore were few and far between until the early '70's, Horror Express different. The creature, who wipes its victim's brains of their memories causing blood to weep from their eyes, noses and mouths, is truly a chilling sight. Horror Express was one of the first horror films of its kind to use blood extensively. One cannot overlook the terrifically eerie musical score either which was provided by John Cacavas. Cacavas' score somehow manages to sound creepy, funky, and vaguely Russian all at once. Click here to listen to the film's haunting theme.

Perhaps the most important thing to note about the production of the film was Peter Cushing's reluctance to accept the part. Produced in late 1971, Cushing was still suffering from the recent death of his wife Helen and was not keen on traveling to Spain, especially due to the film's scheduled shooting around the Christmas holiday. It was Christopher Lee, Cushing's close friend who convinced Cushing to stay on, and Lee even invited Cushing to spend Christmas with his family. That's what's so appealing about Horror Express - it is perhaps the only film in which Cushing and Lee co-starred which showed any indication of the two men's strong friendship which existed off screen.

Rather perfectly described as The Thing from Another World meets Murder on the Orient Express, Horror Express is a fun, eccentric horror romp. Peter Cushing and Christopher Lee are delightful as the film's leads, leading a host of great supporting actors in the campy, creepy fun. As a standard horror flick it's very entertaining. As a Cushing and Lee collaboration, it's one of the best, which therefore earns it 4.5 out of 5 stars.
Posted by Nick Cardillo at 4:02 AM