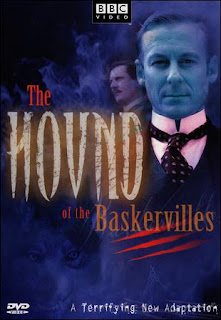 You would be hard-pressed to find someone who is more devoted to Arthur Conan Doyle's original Sherlock Holmes canon than my humble self. I do not take kindly to major deviations and changes to Doyle's works, however for all of us we have our guilty pleasure. For me, it is the 2002 BBC version of "The Hound of the Baskervilles" featuring Richard Roxburgh as Holmes and Ian Hart as Watson. The made-for-television movie makes a number of dramatic changes with Doyle's masterpiece, but the whole film is so stylishly done that one can almost forgive the BBC.

So, what is wrong with the 2002 "Hound?" Well, the characterizations are wrong for a number of the central characters and major plot-points are changed (a few for the better). I should warn you now - this post will have multiple spoilers for this 2002 adaptation, so if you have not yet seen the film and want to, I suggest you stop reading here. Otherwise, let's look at this movie a bit more closely.

First, we tackle the character of Sherlock Holmes. To begin with, Richard Roxburgh certainly does not look the part as the great detective. He has very little resemblance to the original Sidney Paget illustrations of the detective. Beyond that, the way that Holmes is written makes him such a condescending and unlikable character. The original Sherlock Holmes may not have been the most friendly of individuals, but Roxburgh's Holmes is such a prickly character he garners little sympathy and exude very little amiability. Another mark against him is his relationship with Dr. Watson. The two men are constantly arguing throughout the film. At one point, Holmes quite calmly calls Watson "an idiot" as though this were an everyday occurrence.

What's more, this Sherlock Holmes is presented here is in the thralls of his cocaine addiction. As a rule, Holmes would never be using his seven-per-cent solution of cocaine during a case, so this is a direct contradiction of Doyle's writings. Furthermore, it adds nothing to the story, so there is no real reason why scenes of Holmes indulging in the drug are needed, and they only cause more dislike to mount on the detective.

Luckily, most of the other main performers do a great job. Most notably, Richard E. Grant is fantastic as the villainous Jack Stapleton. Ian Hart makes for a Watson who is quite close to the original Arthur Conan Doyle conception.

Most of the scenes which play out on the moor are fantastic (including a seance scene which copies off of the 1939 "Hound" adaptation). But it is in the film's closing stages where the story is dramatically altered. The plot is so drastically, it hardly feels as though the story is Arthur Conan Doyle's anymore. What's more, our lasting impression of the detective duo is a bad one - Dr. Watson telling Holmes that he does not trust him.

So, what could possibly redeem a story like this? The 2002 adaptation's production values are by far the best of any "Hound" adaptation. Furthermore, it creates a feeling of unrelenting evil and mystery, which is so often lost in other films. That in itself does justice to Doyle's classic. It is for that reason that "The Hound of the Baskervilles," though changed considerably does keep the spirit of the original alive.

Posted by Nick Cardillo at 3:30 PM