Review - "Sherlock Holmes and the Element of Surprise" 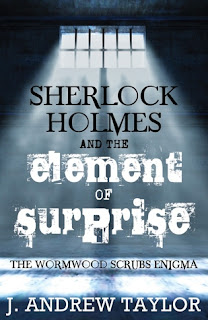 Sherlock Holmes is faced with a very perplexing mystery. Two guards at the Wormwood Scrubs Prison have been discovered dead. Their headless bodies have been found lying in the middle of an open field, surrounded by snow which yields no footprints. An impossible mystery like this is one which the great detective can hardly refuse and soon he and Dr. Watson are off to investigate.

"Sherlock Holmes and the Element of Surprise" yields many surprises of its own. J. Andrew Taylor's pastiche is more of a novella than a novel, and I found that I could easily read this book in two sittings. Nevertheless, Taylor managed to capture the style of writing and story-teller that Doyle utilized which made this book seem more like an original.

Sherlock Holmes is presented as being a gung-ho character throughout the story. In the story's opening, he "kidnaps" Dr. Watson and his wife, Mary, by disguising himself as a coachman. What is perhaps somewhat lacking is Holmes' deductions throughout the story. What leads him to his solution of the crime is based mainly on intuition. Granted, things are wrapped up nicely come the story's conclusion, but it would have been nicer for Holmes to have made a series of astounding deductions much to the befuddlement of the local constabulary and Inspector Lestrade.

Speaking of Inspector Lestrade, I was quite surprised by his character. He is presented throughout as a comic character, though not bumbling. Sherlock Holmes and Dr. Watson have fun at his expense during the story. While awaiting a train, Holmes suggests that they all go to the pub, much to the Inspector's chagrin. Only after making Lestrade wait on the platform for half-of-an-hour does the detective reveal that he knew their train was going to be delayed. The presentation of Dr. Watson is also well done. He is a competent medical man who is presented throughout as being a great help to the detective in the case.

With good presentations of the characters, it would have been made the story far greater if the actual plot had been better. The initial impossible crime scenario was intriguing, but by the half-way point of the novella, I already knew what the outcome was going to be. The criminals responsible for the two gruesome murders are characters who are presented throughout the story, and once more Holmes does make all the points in the mystery clear. Yes, Sherlock Holmes often kept the facts in a case from Watson and the others, but in this story I felt as though there were no suspects for me to narrow down.

In all, "Sherlock Holmes and the Element of Surprise", though well written is rather underwhelming. The story  begins very excitingly, but goes downhill afterward. By no means am I saying that this book is not good, but it could have been better. I give this book 3 out of 5 stars.
Posted by Nick Cardillo at 7:56 AM