The Snowmen are Coming... 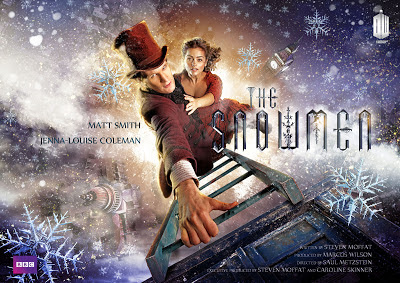 The countdown to Christmas has begun for many - perhaps for more reason than one. Christmas day marks the return of "Doctor Who" to the BBC for the sixth Christmas special - this time penned by Steven Moffat.

So, why I am blogging about "Doctor Who" again on this Sherlock Holmes blog? Well, Moffat's next special entitled "The Snowmen" will take place in Victorian London and shall deal with alien snow. Besides that, little information has actually been gained about the episode, so fans of the show are preparing themselves around the globe. Recently, the three-minute long prequel to the episode was released, showcasing Moffat's cheeky sense of humour. The Doctor, now taking up residence in Victorian London, is being dubbed The Great Detective (hmm...sound familiar?).

So, the countdown to the next episode is on. Rest assured, a review of "The Snowmen" will be on this site after the episode airs.
Posted by Nick Cardillo at 4:42 PM