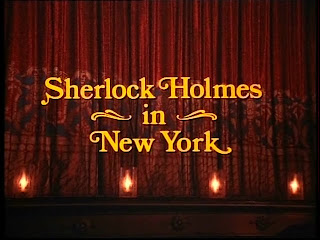 Opinions rage over this 1976 made-for-television Sherlock Holmes film. Some find it cheekily enjoyable. Others find it abysmal - the concept of Roger Moore putting on the deerstalker hat and Inverness cape a travesty to Arthur Conan Doyle's character. So, what's my opinion? Well, today I will look into "Sherlock Holmes in New York."

1903 - Sherlock Holmes (Roger Moore) has foiled the nefarious plots of Professor Moriarty (John Houston) once more. Before escaping justice, Moriarty threatens to destroy the great detective. A short while later, Holmes receives a warning message from Irene Adler (Charlotte Rampling), who is currently working in New York City. Holmes and Watson (Patrick Macnee) travel to the Big Apple where they learn that Irene's son, Scott, has been kidnapped. Meanwhile, the great detective is contacted by the local authorities when the entire New York Gold Depository is robbed. Surely, both the kidnapping and the theft are the crimes of the Napoleon of Crime, Professor Moriarty, exacting his revenge on the great detective?

"Sherlock Holmes in New York" was filmed between an unusually long gap between two of Roger Moore's James Bond films. Moore was not interested in playing the role of the detective, but after reading the script for the film, he changed his mind. Moore was determined to create his own interpretation of the detective, and not to be influenced by any other actors.

What upsets most fans about "Sherlock Holmes in New York" is the semi-controversial plot line. It is hinted throughout most of the story that Holmes and Irene had in fact been lovers and that Scott is their child. This had not been a new concept (having first been suggested in the 1962 'biography' of Sherlock Holmes, "Sherlock Holmes of Baker Street). More recently, theories have drifted about that Rex Stout's detective, Nero Wolfe, was in fact the great detective's son.

In the eyes of many, such a controversial plot could perhaps have been carried off if the actor playing Holmes was better. In all honesty, Roger Moore as a debonair, suave detective is not all that bad. He essentially plays the role as if he were playing James Bond, or television's Simon Templar, 'The Saint.' Moore's smug detective does embody certain qualities of the original, but on a whole he is not the perfect actor suited for the part. Other actors in the film are a mixed bunch. The usually likable Patrick Macnee is very upsetting as Dr. Watson (adopting a cockney accent, which is even more annoying than Nigel Bruce's bumbling), and John Houston accentuates a Scottish accent which gets quite tiresome.

On a whole, "Sherlock Holmes in New York" may have some redeeming qualities though. The plot involving the stolen gold is enjoyable, and in these segments when Moore's Holmes has some detective work to do, he seems like a worthy successor to the deerstalker hat. While the film is by no means the epitome of Sherlockian entertainment, the redeeming qualities are there nonetheless. I give "Sherlock Holmes in New York," 2.5 out 5 stars. An enjoyable, but by no means excellent, Sherlockian effort from all involved.