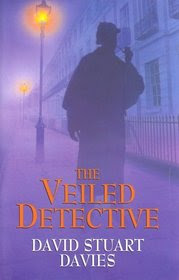 Professor James Moriarty, Napoleon of Crime and organizer of nearly half that is evil in the city of London, is prepared to do anything to remove a thorn from his side. A brilliant young man, calling himself a detective has persistently interfered in the Professor's business. What is worse for Professor Moriarty is the fact that that man is none other than Sherlock Holmes.

To rid himself of his problem, the Professor hires an alcoholic doctor recently returned home from the war in Afghan War. His name is John Walker. Walker is hired to take on the alias Dr. John Watson and learn as much as he can about Sherlock Holmes. What follows is a brilliant character study which makes David Stuart Davies' "The Veiled Detective" such a pleasure to read.

While the concept may be off-putting to some, "The Veiled Detective," is by far one of the best, and one of the most original Sherlock Holmes pastiches I have ever read. The book tells the story of the true events surrounding "A Study in Scarlet," "The Final Problem" and more. However, it is not the plot of the book which is the novel's greatest asset it is the wonderful characterizations therein. David Stuart Davies is not afraid to paint a picture of the world's greatest detective which may be different than that seen in other pastiches, or even Arthur Conan Doyle's canon.

Davies portrays Holmes as a deeply flawed individual. The book examines the great detective's addiction to cocaine, as well as new all-together new traits and there are reasons given to the detective's misogynist views. Featuring two such broken and battered characters as Sherlock Holmes and John Walker makes for interesting reading, as the two discover they are in fact kindred spirits. Seeing this darker, flawed, anti-hero-like detective is a dramatic change from the normal, but it is presented in such a way that the characters seem fresh and new at the same time as being familiar. 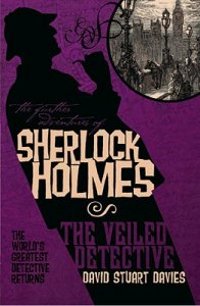 My only complaints would be in two of the more minor characters. Mycroft Holmes, whose involvement in the story is minimal, is presented here as being in league with the villains, which was a rather surprising and rather unnecessary twist. The other problem was the way that Professor Moriarty was presented. He was made out to be quite young, which went against Doyle's writing completely. This seemed like another change which was made without any real good reason.