A Short Apology and a Look Forward

I'd just like to take a moment to say that in these few weeks leading up to the Christmas season, I have been very busy. Therefore, I have not been posting as much as usual on this blog. In the coming few days, I hope to return to cyberspace with my usual analysis and reviews. 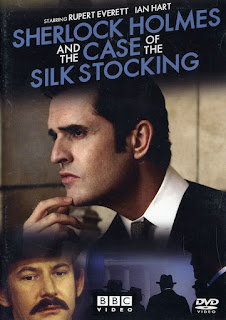 So, what can you expect on The Consulting Detective in the near future? For starters I will take a look at the BBC 2004 film, "Sherlock Holmes and the Case of the Silk Stocking" starring Rupert Everett as Holmes and Ian Hart as Watson. In addition to this television film, I will look three of the films from Universal Studio's series of 14 Holmes films. I will examine what are commonly believed to be the best of the 14 films - "The Spider Woman," "The Scarlet Claw" and "The Pearl of Death."

After Christmas, I will be post my review of the "Doctor Who" Christmas special, "The Snowmen."

And on the book review front, I will take a look at Paul D. Gilbert's "The Giant Rat of Sumatra." It sounds like we're in for some interesting reviews in the coming days, and I can only imagine what January of 2013 shall bring - that's because we survived 2012. Sorry Mayans, you were wrong.

Posted by Nick Cardillo at 1:17 PM