Even to the most devout Sherlock Holmes enthusiast, they be unaware of some of the very common misconceptions associated with the character. In today's post, I will examine the top three - Sherlock Holmes never wore the deerstalker hat in London, he never smoked a calabash-style pipe and he never said "Elementary my dear Watson."

Perhaps the most surprising misconception associated with Holmes is the fact that he never wore the deerstalker hat in London. Sherlock Holmes would never have worn such a hat in the heart of the city. Holmes was often described as being up-to-date with the latest fashion trends for men in the Victorian Era. A cloth cap and tweed jacket was relegated only for the county side. What is perhaps even more surprising is how few times Holmes actually wore the hat.

Even when he was not in the country, Holmes did not wear such a noticeable piece of headgear. For example, in "The Speckled Band" and "The Hound of the Baskervilles," Holmes is seen sporting a bowler hat and homburg respectively. Why, you may ask. In both stories, the great detective wishes to move about the countryside in secret to conduct his detective work. When Holmes is doing his detective work in the metropolis however, he oftentimes sports a top hat and fashionable frock coat. 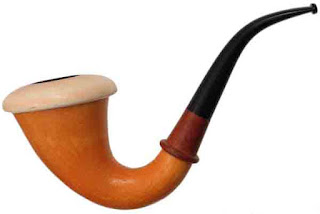 In addition to his detective work in the field, Holmes did most of his work from his armchair. Aside from his convex lens, Holmes' other tool of detection could perhaps be his pipe. Sherlock Holmes is known for having three types of pipes - a briar, a long cherry-wood and "oily clay." But what Holmes never smoked was a calabash-style pipe pictured on the left. The first time that the pipe was used in association with Holmes was during the original stage play starring William Gillette. Gillette chose the pipe because he could easily rest the pipe on his chest during his monologues.

The fact that there is more in store with Sherlock Holmes makes things perhaps a bit more not so "elementary."
Posted by Nick Cardillo at 4:20 PM