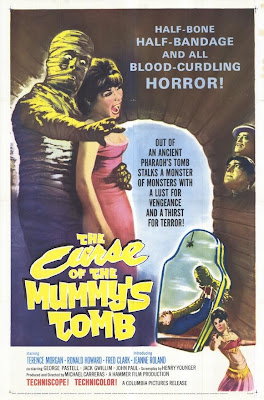 We've concluded our second wave of Hammer Horror on this blog and this time I'm reviewing the 1964 thriller, "Curse of the Mummy's Tomb." This film was the first follow-up movie to Hammer's 1959 remake of "The Mummy" which featured Peter Cushing and Christopher Lee. Let it be known that this movie is not connected to the previous movie.

"The Curse of the Mummy's Tomb" begins in Egypt with an expedition to unearth a coveted mummy's tomb. The expedition comes to a halt when the American financial backer, Alexander King (Fred Clark) decides to take the findings on tour of the British Isles before eventually going onto the United States. However, at the ceremonial opening of the mummy's sarcophagus ends badly when the mummy's body disappears. As the members of the expedition begin to be murdered one by one, it's up to the young Egyptologist, John Bray (Ronald Howard) to put the pieces of the puzzle together and discover the mummy's curse.

In this reviewer's opinion, audiences have also been fascinated by ancient Egypt. Since the discovery of King Tut's tomb by Howard Carter in 1922 and the myth of a curse which ensued, there has also been a fascination with mummy's, curses and what not. The Universal horror film series concerning the mummy has also been among my favourites. The trend of cursed mummy's tombs continued beyond the '60's and Hammer's revival into the '70's. The "Doctor Who" serial, "Pyramids of Mars" oftentimes crops up on people's list of best serials, and it was included in part of BBC America's "Doctor Who Revisited" specials. What's more, the mummy franchise was resurrected in 1999 and it spawned two sequels. However, the true question is - did "The Curse of the Mummy's Tomb" contribute well t0 the history of mummies on film?

I'll say now that this movie was rather odd, beginning with a very unusual structure. There are two flashbacks throughout the course of the movie, which really breaks the narrative's flow. What's more, the first two acts of the movie don't seem to know what genre this film should be. There are hints of humour throughout the first portion as well as action and adventure and some mystery, and of course horror. It's not until the film's third act do things really hit their stride as the mummy returns to life to kill all those in his path. This portion of the movie was well-handled, and I wish that more time could have been devoted to the mummy attacks, as these scenes were especially creepy. There's also something rather unnerving about the fact that the mummy just so happens to be wandering around the streets of Edwardian London.

The cast of the film is equally odd as its pacing. In the starring role as hero archaeologist and amateur detective is Ronald Howard. Howard does a good job in a part which is in essence by the numbers. There's nothing especially memorable about his character or his performance, but he does do a good job. Howard was the son of famed actor, Leslie Howard, and during the 1950's starred as Sherlock Holmes in a television series, filmed in Paris. Howard's performance as Holmes is slightly different than the norm, but that's a post for another time. Also appearing is top-billed Terence Morgan, in a ludicrously over-the-top performance. (Mild-spoilers ahead) From his first appearance on screen, I knew something was up with his character and he couldn't be as lily-white as he seemed. His final motivations however were quite surprising and I will confess, I did not see it coming.

All in all, "The Curse of the Mummy's Tomb" is not exactly Hammer's finest hour, but it's hardly a bad picture either. It has plenty of creepy, atmospheric moments and enough severed hands for two pictures (it's a long story). I give the movie 3 out 5 stars. It's a worthwhile Hammer production, but surely not the pinnacle of Hammer horror.
Posted by Nick Cardillo at 5:30 AM