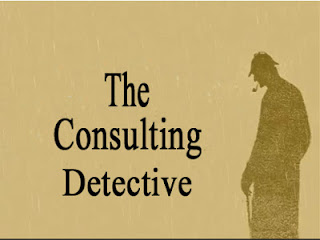 I can hardly believe it - 100 posts already! This blog has undergone a number of changes over the past months since I began, I expanded my topics and I've written about the good, the bad and the ugly. In order to celebrate my first 100 posts on this blog, I hope to take a look back at my top 10 favourite posts I have made on this blog.

I suppose I'll begin at the beginning. The Consulting Detective came into being on 10 November, 2012. For some time I had considered starting a blog so I could share my opinions of books, movies, audio etc. Seeing what other mystery blogs had managed, I was inspired to take on the challenge of managing my own blog and out of that desire came this humble site in which I introduced myself with an appropriate quote straight out of "The Sign of Four." Over the course of November, I managed 15 posts and firmly cemented myself as a reviewer of the Internet. Perhaps November is notable for the fact that it marked the first time Doctor Who found its way onto this blog when I reviewed "The Talons of Weng-Chiang."

And speaking of Doctor Who, it's after the airing of the 2012 Christmas special, "The Snowmen" that I decided to take on Doctor Who as another avenue for review and analysis on this blog. Since then, I have committed to this blog my opinions of the seventh series of the show as well as a look back on one of the most tumultuous eras of the show's history. And while we're on the topic of changes to this blog, it was in April of 2013 when I decided to take on the mystery genre on a whole, so I take on Agatha Christie, Ellery Queen, Raymond Chandler and others.

With that brief summary of this blog in mind, I now turn to my top 10 favourite posts over the past 8 months. These ten are in no particular order aside from the fact that they are posts which I think stood out the most and were the most fun to write.

#10 - The Good, The Bad and the Just Plain Ugly: Creative Liberty Gone Too Far
It felt good to get some anger off my chest with this one. I had always wanted to dabble in the angry rant and this blog seemed perfect. You see, I try to remain as reserved as possible and it was in this post where I managed to convey my anger at the bad pastiches which I have had to read. In particular, this post also allowed me to hopefully convince my readers never to read "Sherlock Holmes: The War of the Worlds," surely the worst Sherlock Holmes pastiche which I have ever read. If you happen to read the book, I'm terribly sorry.

#9 - Those who were Rather Rudely Forgotten
This post was another one in which I managed to cover a great deal of material in a short space of time. After I conducted a poll on this site to determine who portrayed the detective best in audio, I realized I'd neglected some great names associated with with the genre. In this post I managed to cover nearly 60 years of Sherlock Holmes on radio and in audio-book format, and managed to voice my somewhat unpopular opinion toward the series featuring John Gielguid and Ralph Richardson as well as the audio books with Derek Jacobi. 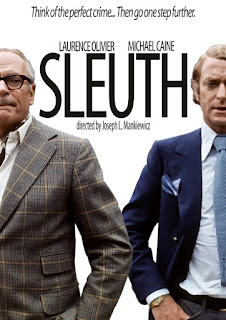 #8 - Sleuth (1972)
Shortly after I announced that this blog would accommodate the mystery genre as a whole, I decided to review the magnificent film version of "Sleuth" featuring Laurence Oliver and Michael Caine. The film is one of my very favourites, featuring two splendid performances from Oliver and Caine and we get a well-done thriller and loving mystery tribute for the price of one. It's an excellent movie and if you have not yet seen this original film version, you must seek it out.

#7 - Going on a Diet Mr. Mycroft?
I admit that once and a while I succumb to complete randomness and this post was one of my most random. In this short article, I question whether Mycroft Holmes, portrayed in the original stories as an immense, obese man, must be portrayed as such on film? I managed to cite my love of Christopher Lee and Mark Gatiss' performances as the great detective's brother, and interestingly enough this strange little venture has managed to become my most-viewed post. Rather interesting that.

#6 - The Two Doctors
Of all my reviews, this review for the Sixth Doctor serial, "The Two Doctors," is perhaps my most professional. I have rather a lot to say about this adventure, there's much to like and perhaps even more to dislike about it. I feel like I managed to convey my wavering opinion about this particular story in this post, and I often go back to this one as one of my very best examples of film critique.

#5 - Taking the Bull by the Horns
This being primarily a Sherlock Holmes blog, I had to at least once comment on CBS' "Elementary." Once you get over the fact that the show is a rather obvious rip-off of "Sherlock," and you look beyond that there's some interesting things to be seen. The show can hardly even compare to the level of excellence of "Sherlock," yet Johnny Lee Miller does give a good performance as Holmes, but the show lacks originality and doesn't feel like a Sherlock Holmes drama at all. This one post manages to sum up my opinion of that series and I think it brings that matter to a close.

#4 - A Sherlockian Guilty Pleasure
I am not perfect, and therefore I succumb to enjoying something Sherlock Holmes-related which I perhaps rather ought not to. The 2002 adaptation of "The Hound of the Baskervilles" has a great number of problems, making it one of the weakest adaptations of the novel and yet, it is very entertaining. The BBC's production values are glorious and there are some good moments. I liked being able to point out the obvious flaws concerning this movie, but hopefully defending it - something which I hope to do in the future.

#3 - The Twelve Best Stories
It always feels nice to go back to the canon and I think that examining the original stories of Arthur Conan Doyle is a worthy endeavour. In this particular post I managed to examine what ACD thought were the best Sherlock Holmes short stories as well as provide a list of my own favourite short stories. The task of narrowing down the entire canon to twelve was an incredibly hard task.

#2 - A Study in Ink: The Illustrators of Sherlock Holmes
Examining the peoples who have brought the work of Arthur Conan Doyle to life through pen, ink and paper was very interesting. It was a lot of fun to maneuver through pages of Google Images of Sidney Paget, Fredrick Derr Steele and others, and I honestly only scratched the surface of Sherlockian illustrators. And to top it all off, it wasn't until after I had posted the analysis did I realize that my title contained a great pun. 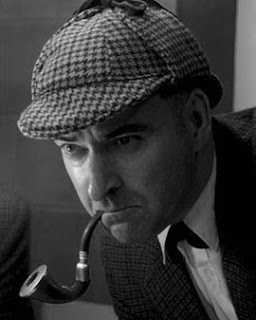 #1 - Holmes and the Ripper
Despite the fact that this was by no means my greatest review, there is something thrilling about the very first review which I posted on this site. Looking back now, it's great fun to see how far I have come with reviewing and interestingly this very first review on the blog set up my very first series. It was shortly thereafter that I began to review the rest of the Big Finish Sherlock Holmes series featuring Nicholas Briggs (pictured at right) as Holmes and Richard Earl as Watson. By indulging in these audio dramas, this paved the way for the Doctor Who dramas also from Big Finish.

It's been great fun for the past eight months bringing you reviews and analysis. With my first 100 posts under my belt, it feels as though the next 100 will go by quickly. Luckily, summer is just around the corner and this will allow time for me to keep up with this blog. I hope to continue to supply you with reviews, analysis and if you can find it a vein of dry humour. For all of those who have visited this site in the past, I thank you immensely. Managing this blog has been anything but elementary, but a lot of fun!
Posted by Nick Cardillo at 5:10 AM