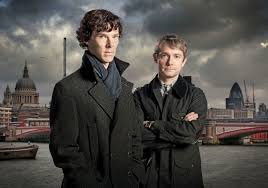 Here, though the world explode, these two survive/And it is always eighteen ninety-five. -Vincent Starret

The famed Sherlockian scholar, writer and apparently amateur poet was responsible for writing the above two lines, which form the ending of his poem about Sherlock Holmes and Dr. Watson. The phrase above has become well-known in Sherlockian circles, but the question is: does it still ring true today? As Sherlock Holmes is becoming more and more popular, is it truly necessary that he remain a part of Victorian society? There are two television series which have updated Holmes into the present day, and there were many films made during the 1930's and '40's which abandoned a Victorian setting. Let's take a closer look.

In the 1930's, when Sherlock Holmes was making his first great impact on the world of film, all of his adventures were updated into the present day. Actors such as Clive Brook, Arthur Wontner, Reginald Owen and others all played a detective who was well-versed in the modern world. A 1931 film version of "The Speckled Band" starring Raymond Massey actually featured Holmes living in a luxurious skyscraper, employing dozens of secretaries and recording important conversations on a Dictaphone. Aside from this movie were it seems as though the update was intentional, most of these movies were set in a contemporary setting purely for the means of saving money. It was not until 20th Century Fox released "The Hound of the Baskervilles" and "The Adventures of Sherlock Holmes" starring Basil Rathbone and Nigel Bruce did the characters return to the Victorian milieu.

However, once Fox dropped the series and it moved to Universal, the powers that be there also updated the stories into the modern world and the first three films made at the studio concerned Holmes employed by the government to fight Nazi agents in various capacities. This idea was retained throughout the series and Holmes and Watson are perfectly comfortable using telephones and radios, and at one point Basil Rathbone's Holmes is glimpsed driving a car! When the series ended at Universal in 1946, Holmes became a staple of television, and surprisingly the detectives returned to the Victorian word for their romps on the small screen. However, it wasn't until 1959 when Hammer Studios released "The Hound of the Baskervilles" did Sherlock Holmes of the movies return to the Victorian Era. Throughout the '60's, '70's and '80's, Sherlock Holmes remained a character operating in the 19th century, but as the new millennium dawned, Sherlock Holmes would find himself in a more contemporary or even futuristic setting.

So, the rhetorical question which I pose is this: does Sherlock Holmes need to remain a character of the Victorian Era, or can he work just as well out of it? With "Sherlock" and "Elementary" gaining popularity today, it appears as though the latter seems more likely. In my opinion, Sherlock Holmes really is a product of the Victorian Era, and whenever he's placed in that milieu, it seems the best. That's not to say that Sherlock Holmes cannot be updated into the modern world. It's certainly been done enough and the more modern versions of these updated stories do do the update nice enough. But, I put the question to you as well - does Sherlock Holmes need to remain a character of a bygone age? At the rate things are going, it won't always be 1895.
Posted by Nick Cardillo at 7:50 AM