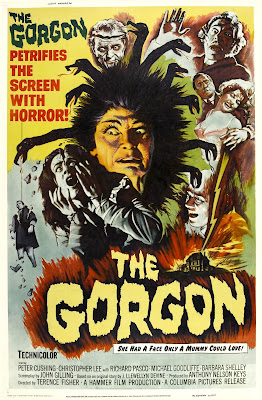 Yet another round of Hammer Horror today - this time, the memorable 1964 thriller, "The Gorgon." What I'll say right from the start, and which may be evident from the following synopsis, is that the film cleverly crosses multiple genre lines. "The Gorgon" is at once a horror film with a supernatural monster, a Gothic thriller, a mystery and a doomed romance.

The film's setting is the isolated German hamlet of Zandorf which is being preyed upon a monster. In the course of five years, seven young women have been discovered dead in the forest outside the village, each one turned to stone. It seems as though everyone in the village is concealing something, including the town's doctor, Dr. Namaroff (Peter Cushing) and his assistant, Carla (Barbra Shelly). Following the death of his father and brother, Paul Heitz (Richard Pasco) arrives in town to discover who or what is responsible for their deaths. With the help of his professor (Christopher Lee), the two are determined to find the Gorgon.

"The Gorgon" is a very dark film. The entire movie has a very bleak atmosphere, more so than most Hammer films, but it adds to creating a proper atmosphere of dread and horror. The isolated village goes a long way to cut the principle characters out of the outside world, and there are few scenes which are not set in the village. A moody atmosphere is also well established in the fog-shrouded forest setting, and the repetitive shot of thick clouds covering a full moon are very moody. While I'm discussing the atmosphere, I ought to mention Terence Fisher, the film's director, who was responsible for some of Hammer's finest films, and this is probably a fine explanation as to why "The Gorgon" feels so creepy.

The performances from the main performers are excellent. In an interesting reversal, Peter Cushing is cast here as the villain of the piece, while Christopher Lee fights on the side of the angels. Cushing is just as excellent in the role of a heavy as he is the hero. The part of Dr. Namaroff may not be the epitome of a mustache-twirling villain, but he does shield the woman he loves, even when things to crumble down around him. While Namaroff is as bleak a character as the film itself, Professor Meister, played by Christopher Lee is a breathe of fresh air. He manages to elicit a few smiles, especially when he's showing his clear irritation unto Patrick Troughton's police inspector. "Don't use large words inspector," the professor cries, "They don't suit you." It's a grand, humane performance.

Other performers in the film are just as good. Barbra Shelly is wonderful as Namaroff's assistant, Carla. Her motivations for acting strange throughout the film are wonderfully ambiguous and once it's revealed, it's actually quite surprising. Mentioned above, Patrick Troughton puts in an appearance as the representative of the constabulary, Inspector Kanof. It's rather jarring for me to see Troughton as I'm used to seeing him play the "Cosmic Hobo" interpretation of the Doctor in "Doctor Who". In addition to a fine cast, there are some wonderful set pieces. There's an eyebrow-raising operation performed by Namaroff as he removes the brain of a dead patient. By the time of this film, Cushing had some practice with brain removal by repeatedly playing Baron Frankenstein. The always out-of-frame head was in fact a cabbage on which Cushing performed mock surgery. There is also a great exchange of words between Lee and Cushing, and it underlines what great screen chemistry the two actors had together.

"The Gorgon" is a very entertaining horror film with a very dark, bleak atmosphere and especially fine performances from Peter Cushing and Christopher Lee. This film, like my last Hammer review, is included on "The Icons of Horror: Hammer Horror Collection," where it is partnered with the film, "The Curse of the Mummy's Tomb," the movie for which it was released a double-bill in America. The tag line for "The Gorgon": She had a face only a mummy could love. I give this movie 4 out of 5 stars.
Posted by Nick Cardillo at 7:59 AM