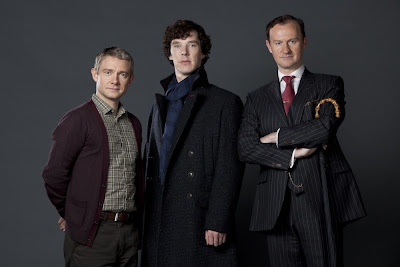 Well, finally the powers that be at the BBC have revealed the last title of the third season of "Sherlock." The three titles are:

Just from the titles, I am already very excited. While I am not the biggest fan of Steven Thompson's two episodes, I am sort of excited that he's in charge of a Sign-of-four-based episode. Thompson's first contribution to the series, "The Blind Banker" is sort of in the vein of a metropolitan thriller, and I hope something like that is incorporated into his third episode.

I really do not have much to say on the topic now. There will be probably be some more speculation from me forthcoming...
Posted by Nick Cardillo at 8:21 AM