Review - "Sherlock Holmes and the Adventure of the Jacobite Rose" 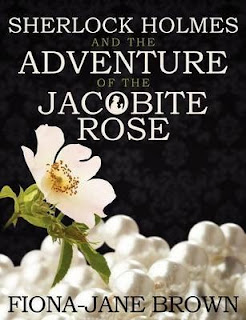 It is perhaps somewhat unusual that Sherlock Holmes has been adapted to the stage more often. Off hand, I can think of only two major Sherlock Holmes plays: William Gillette's rather revolutionary show, "Sherlock Holmes" and Paul Giovanni's play, "Sherlock Holmes and the Crucifer of Blood." There are of course others, but nothing on a truly grand scale. I chalk to this up to be the fact that the Holmes stories seem to take place over a wide number of settings, thus rendering it rather difficult to confine the action to one set. Nevertheless, the challenge has been accepted by Fiona-Jane Brown as she wrote "Sherlock Holmes and the Adventure of a Jacobite Rose," an original two-act play.

Sherlock Holmes is engaged on two cases at once. His brother Mycroft comes to consult him after one of his best secret agents goes missing. At the same time, the detective is called upon by Miss Rebecca Lazenby, a wealthy young socialite and the step-daughter of Lord Wexford Foyle. Miss Lazenby is upset at her step-father that he shall not part with a famed jewel known as the Jacobite Rose, which has been in the family for years. Fearing a deception, Miss Lazenby asks Holmes to authenticate the jewel is passed unto her. However, unbeknownst to Holmes, these seemingly unrelated cases are in fact connected.

"Sherlock Holmes and the Adventure of the Jacobite Rose" was a fun reading experience. For someone so theatrical at myself, it was a joy to read the parts aloud. Reviewing the item as a play, I must say that the dialogue is good and quite in abundance. Despite the fact that the show is heavily steeped in dialogue, it doesn't feel weighed down by this. The story moves along at a quick pace and I managed to read the the book in two short sittings. There are also careful notes on setting, costumes and expression, which is quite nice for any actor. The book is also over-sized, and laid out very nicely providing an easy reading experience for the actor or the reader.

Where the story rather suffers is its plot. The story is not very complex, so it's rather surprising that Mycroft Holmes, who is more intellectual than his younger brother, must call upon his brother to solve the case. Once it becomes apparent what is going on, which occurs at about the mid-way point, there isn't much mystery to be had. It's still nice to see Holmes makes some deductions, but he doesn't do much in the line of detective work here.