The Fan's Contribution to Sherlock Holmes

Since 2009, Sherlock Holmes has increased in popularity like never before. Due to the success of BBC's "Sherlock Holmes" and Guy Ritchie's "Sherlock Holmes," the character has once more became a house-hold word. Sherlock Holmes has always been famous, but since then a Sherlockian such as myself has been on cloud nine. Due to the popularity of the character increasing dramatically, a much larger fan base has grown. Today, I wish to look at that fan base, and throw in my own opinion on the topic. Before, I go any further, you really should study the above picture depicting Robert Downey Jr., Jeremy Brett, Vasily Livanov and Benedict Cumberbatch.

In essence, a Sherlock Holmes pastiche is a work of fan fiction. Fan fiction that was deemed good enough to be published and sold on bookshelves that is. If one simply visits www.fanfiction.net (I give you my friendly warning before doing so), one will find that 3,447 fan fiction stories have been uploaded. There is of course a vast difference between the stories presented on that website to what you'll find at your local book shop, but I wanted to point out that fan's contribution to the Sherlock Holmes mythos has been going on for decades. Nicholas Meyer's "The Seven-Per-Cent Solution" published in 1974, became an international best-seller and of course spawned a film version two years later.

Just like anything in a fan's hands, a pastiche can go awry, but that is a topic I have already covered to death. However, Sherlock Holmes fans have managed to express themselves in other ways than the written word. Fan art is all over the Internet, most specifically on the website tumblr. Again, visit at your own risk. And if you are a frequent contributor or visitor to fanfiction.net or tumblr, please accept my apologies. Some fan art is actually quite good or ironic. The above picture particularly caught my fancy, but there are some pictures devoted entirely to "Sherlock." "Sherlock" has also lead the way to a manga of "A Study in Pink" to be published - curiously without the consent of the BBC. 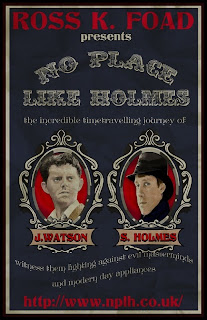 The most elaborate form of fan contribution is through film. I cannot point out every Sherlock Holmes fan film on YouTube, however if you ever decide to Google it, there is a very nice adaptation of "The Hound of the Baskervilles" done by a group of teenagers. One of the most successful fan films is actually a YouTube series, the YouTube comedy/drama, "No Place Like Holmes." Starring Ross K Foad as Holmes, the series finds Holmes and Watson transported through time into the present day as they continue to solve mysteries. Though obviously filmed on a minimal budget, the series is nonetheless an enjoyable one. Ross is well-versed in his Sherlock Holmes, and also hosts a number of very helpful book reviews - a number of which come from the Sherlock Holmes pastiche Mecca, MX Publishing.

The real question is - have these fan contributions done for harm than help for the detective? It seems like wherever one goes, you cannot help but run across some piece of strange fan art or outrageous piece of fan fiction. I have done my best to distance myself from some of these fan contributions, since I really take my Sherlock Holmes seriously. I do not mean to belittle any of the artists or authors who have created any homage to the character, but it's simply not my cup of tea.

Since the release of BBC's "Sherlock," I feel as though the Sherlock Holmes fan base has become greatly divided. To refer to oneself as a Sherlockian now means that you are a fan of "Sherlock." That term certainly applies to me, as I think the show is the greatest Sherlockian piece of entertainment since 1984's "The Adventures of Sherlock Holmes," but then what does one call themselves if they are a fan of Sherlock Holmes in general. What I have grown accustomed to is simply labeling myself a Sherlockian, but showing those concerned that my interest in the character goes far beyond the brilliant television series.

Fans of Arthur Conan Doyle's character have redefined Holmes for years. It was men adopting black arm bands in mourning after Doyle killed Holmes off in "The Final Problem," which in part lead to Doyle resurrecting his character. Since then, the Sherlock Holmes fan base has grown and changed its face many times. While a fan's contributions to Holmes' legacy may be somewhat questionable, in the long run who could do without them?

Below I have included links for both "No Place Like Holmes" web page, where one can view all episodes of the show to the present. Also included is a link to the YouTube channel which includes a very entertaining version of "The Hound of the Baskervilles," as well as a "Sherlock" fan film.