What's fun about the show is how it takes a story from the Sherlock Holmes canon and turns it on its head, in the same way that "The Seven-Per-Cent Solution" did with "The Final Problem." Giovanni also treats a Sherlock Holmes fan to some nice dialogue lifted from other stories. Names from numerous stories are also used in the show. For example, Captain Morstan and Major Shalto are changed to Captain St. Clair and Major Ross, names taken from Doyle's "The Man with the Twisted Lip" and "Silver Blaze" respectively.

The play gained notoriety during its Los Angeles tour when Charlton Heston took over the role of Sherlock Holmes and Jeremy Brett played Dr. Watson. Yes - that's the same Jeremy Brett who later went on to play Holmes himself. Heston returned to the role of Holmes in a 1991 t.v. adaptation of the play starring Richard Johnson, Susanah Harker, Edward Fox and Simon Callow.

#4 - David Stuart Davies - Although he may not be not a famous name in Sherlock Holmes circles, Davies has written a number of highly enjoyable pastiches over the years. Davies was behind the very enjoyable "The Tangled Skein," one of the best Sherlock Holmes vs. Dracula pastiches I've ever read as well as "Shadow of the Rat," a very interesting version of "The Giant Rat of Sumatra" and the fantastic "The Veiled Detective," which was a marvelous Sherlock Holmes character study.

In addition to writing some great pastiches, Davies is also a very well-known Sherlock Holmes scholar. He wrote the book, "Starring Sherlock Holmes" a beautifully illustrated reference guide to Sherlock Holmes on film, and he contributed to a number of DVD commentaries on the Basil Rathbone Sherlock Holmes films. Davies has also written a number of other books, most specifically his own mystery series featuring one-eyed detective, Johnny Hawke.

#3 - Anthony Horowitz - Horowitz may not be instantly associated with Sherlock Holmes. Aside from Sherlock Holmes, Horowitz is a great writer. He was a contributor to "Agatha Christie's Poirot," where he wrote some of the best episodes for the show. Horowitz also wrote the now-famous Alex Ryder series, which chronicled the adventures of a teenage spy.

#2 - Nicholas Meyer - Meyer's "The Seven-Per-Cent Solution" published in 1974, was one of the most influential books on the Sherlock Holmes canon. It was the first time that an author really explored Holmes' drug addiction, but also did much more. Meyer did something unexpected with Sherlock Holmes pastiche, but adding his own spin on the canon. As mentioned above, Meyer invented a new twist on "The Final Problem" which found Holmes and Watson travelling to Vienna to visit Sigmund Freud to cure the cocaine addiction.

The book was also the first time, since the canon, that Sherlock Holmes truly became a best-seller. The book was a New York Times Bestseller, and eventually became a movie two years later starring Nicol Williamson, Alan Arkin and Robert Duvall. 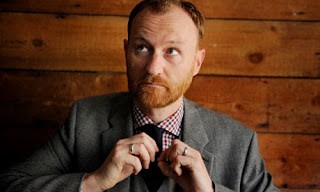 #1 - Mark Gatiss -  Gatiss, co-executive producer and writer for "Sherlock," is perhaps the best Sherlockian writer in the world today. Gatiss is truly the man in charge of "Sherlock," and he even acts in the show playing Mycroft Holmes. Gatiss' contributions to the shoe have also been some of the best. The Series 1 finale, "The Great Game" is some of the best television that I have ever seen, and "The Hounds of Baskerville" is a great re-telling of the story and wonderfully updates it into the 21st century.

I am truly looking forward to Gatiss' work on the third season, as he is writing the series opener "The Empty Hearse." Gatiss' contributions to Doctor Who have also been among my favourites, and he also wrote and hosted a three-part documentary series on horror films, "Mark Gatiss' A History of Horror."
Posted by Nick Cardillo at 11:55 AM