Avoid the Moor in those Hours of Darkness... 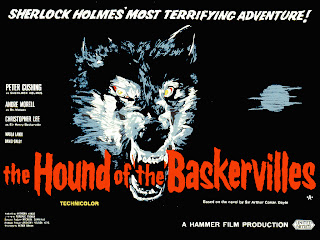 When I was arguing how Peter Cushing may be the definitive, immortal Sherlock Holmes, I gave very high praise to the 1959 version of "The Hound of the Baskervilles" in which Cushing starred as the detective.  Is it the best adaptation of Doyle's novel - no - but it's certainly one of the most entertaining and enjoyable film versions of the famed story.

1957 marked an important year for horror fans. Hammer Studios, a film studio in England, had decided to tackle Mary Shelly's famed masterpiece, "Frankenstein" - capturing the Gothic elements which were prevalent in the novel as well as the acclaimed 1931 film from Universal studios. What emerged in 1957 was "Curse of Frankenstein," starring Peter Cushing as the Baron Frankenstein and Christopher Lee as his creation. Both men give great performances, and they perform against a real blood-and-thunder backdrop, and this film introduced audiences to the bright red Technicolour blood which is now so famous among Hammer audiences. A year later, the two were reunited in "Dracula," where Peter Cushing starred as Van Helsing and Lee as the vampire count. A year later when it came time to find new material for Hammer to produce, it seemed rather obvious that the studio's next film should be based on Doyle's quasi-ghost story.

What I think is so great right from the start is that Hammer's film is simply oozing atmosphere. If there was ever a studio who could capture the Gothic trappings of Doyle's novel, Hammer was that studio. All of the scenes have a very gritty and dark feeling, and when the film shifts to the moorland setting, the atmosphere grows even more as our three leading men move through creepy sets wrapped in fog. What people seem to forget is that Doyle's original book, in addition to being a first-rate detective story, is a fantastic horror novel.

But what of the performances? I have already given high praise to Peter Cushing, but I feel as though his performance in this movie is perhaps some of his best work. It's obvious that Cushing is coming from the perspective of a true Sherlockian fan, and he's performing as though he has Doyle's original word close to heart. I think the most fascinating part of Cushing's performance here is how rude and prickly this characterization of Holmes is. For some viewers, this may be a big drawback - but I really like it. Sherlock Holmes was always sort of a standoffish, prickly guy and I think that this side of the detective isn't explored enough. We've seen more of it recently through Benedict Cumberbatch's performance in "Sherlock,' but Cushing preceded the latter by 50 years.

The other stand-out performance in this movie is Andre Morrell as Dr. Watson. Morrell is one of the best portrayals of Watson ever, bringing a warm sensibility and levelheadedness to the role. Remember, until this time Watson was considered bumbling and blustering (thanks to the ever lovable Nigel Bruce) and now this performance was very different as we see how Watson was originally written by Doyle. Lastly, I'd like to touch on Christopher Lee as Sir Henry Baskerville. This performance as the baronet was his first real chance to play a humane character in a Hammer horror film, and he shows what a capable and versatile actor Lee really is.

While this version of "Hound" does not follow the plot of Doyle's original, it does make up for it in some very interesting ways. The script obviously is trying to add more elements of Gothic horror and to ramp up the level of excellent. For example, an early scene featuring Sir Henry and a large spider is genuinely creepy for those suffering arachnophobia, and it certainly adds a level of danger to the early stages of the film. As the movie progresses, we're treated to an attempt on Holmes' life in a mine shaft and the movie climaxes at an ancient abbey ruin. Obviously, these scenes were not in Doyle's book, but it does add to the horror element of the movie. These changes don't change characters just for the sake of changing things and it doesn't kill off characters unjustly (cough - 2002 version - cough).

In all, this 1959 version of "The Hound of the Baskervilles" could be my favourite. The star's performances are all excellent and the atmosphere of the picture is so wonderfully done. The elements of Gothic horror are tremendously executed throughout the movie and I feel that any Sherlockian fan has to see this movie at some point in their lives.
Posted by Nick Cardillo at 3:46 AM