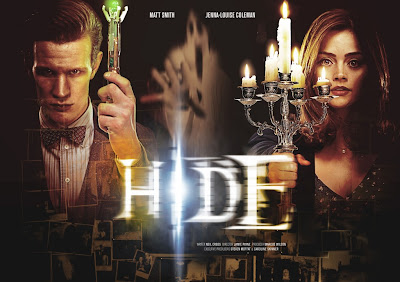 As usual, this review may contain spoilers. For those who wish to remain surprised, turn back now

Who doesn't like a nice ghost story? The latest episode of Doctor Who seems centered around that question as the Doctor and Clara seem to face a force of the supernatural. I for one love the episodes of the show which are a little more on the spooky side, so I looked forward to this episode - interestingly entitled "Hide" - with some interest. Did it deliver the thrills and chilled that I hoped it would?

The Doctor (Matt Smith) and Clara Oswald (Jenna-Louise Coleman) arrive at an isolated manor on the moor. It seems as though a professor and a psychic are trying to contact a spirit named as the Witch of the Well who lives in the house. What does she want and will the Doctor be able to bring the matter to a satisfactory conclusion?

"Hide" was an episode with a great amount of potential, and for the most part it lived up to it. The early portions of the episode were wrought with suspenseful moments and a great deal of atmosphere. The setting of the mansion on the moor was wonderful and the constant rain, wind and lightning were very effective at building up the ghostly atmosphere. For the most part, I'd say the first half of the episode worked the best. It quickly drew me in and wonderfully built up the characters of Professor Palmer (played by Dougary Scott) and Emma, the medium (played by Jessica Raine). In addition, Matt Smith and Jenna-Louise Coleman have their best chemistry in these scenes. Kudos to Jenna - this was the first episode she filmed, but you can hardly tell it. 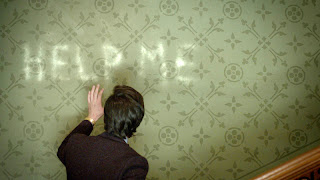 After this, the episode does fall apart a bit, but it's not without it's redeeming qualities. As the Doctor enters the alternate universe, there is some wonderful scenery which goes a long way to increasing the level of suspense and horror. Matt Smith is wonderful in these scenes, showing how the situation has gotten to him. But, the second part of the episode just cannot live up to the same level of quality as the first half did. Also, a trip in the TARDIS throughout various points in time is interesting, but it does feel a bit contrived coming in the middle of the story. Nonetheless, these are too detracting from the overall episode, which is quite good.

"Hide" was written by  Neil Cross, who also penned "The Rings of Akhaten" from earlier this season. Both episodes were good, but I don'd feel as though they were truly outstanding. Don;t get me wrong - "Hide" was a very entertaining episode and it receives a well-warranted 3.75 out of 5 stars.

Coming Next Time: "Journey to the Centre of the TARDIS" (Enough said - but click here for a teaser)
Posted by Nick Cardillo at 6:41 AM