Review - "Cat of Many Tails" 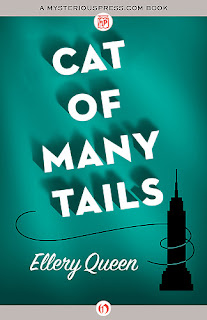 In retrospect, even though the Golden Age of Detective Fiction is by far my favourite "movement" in literature, I am not all that well acquainted with it. I have a good knowledge of S. S. Van Dine, Dorthy L. Sayers, Ellery Queen and others, but I have not actually read any their books. The extent of my love for the era comes from Agatha Christie and Agatha Christie alone.

The biggest problem was that a number of these authors were seemingly out of print, and seemed like I would never be able to read Van Dine, Queen or John Dickson Carr. Luckily, I discovered that the MysteriousPress has recently turned the original Ellery Queen novels in e-books, and I jumped at the opportunity to read one of these books. I decided to start with "Cat of Many Tails," the book for which I had read so many positive reviews. So, did I find this book as good as so many other reviewers did? Let's find out.

New York City is under attack. In the beginning of this book, five people have all been murdered - strangled with a length of cord by a multiple murderer known as The Cat. Inspector Richard Queen of the New York Police Department is promoted to taking charge of the case, and asks his son, Ellery, to help him capture the murderer. The most perplexing problem is that all of the Cat's victims seem to be unrelated. What is the connection between all of the victims, and will Ellery be able to bring the killer to justice?

This was my first encounter with Ellery Queen in the written word. For some time now I have been a fan of a the 1975-1976 television series featuring Jim Hutton and David Wayne who wonderfully portrayed the father and son duo. What I found most interesting about this book was the fact that this story was different from the  earliest Queen novels. This story is not the traditional puzzle mystery where the detectives round up the usual suspects to uncover the identity of the killer. "Cat of Many Tails" is a race-against-the-clock to capture the killer. What's more, this book can in some respects be viewed as a police procedural where the narrative comes to halt to describe the efforts of the NYPD to solve the case. I thought this was a very creative touch as the tone of the story can vary from chapter to chapter.

The city of New York is also beautifully described throughout the book. Other reviewers have said that the city becomes a character itself and I am inclined to agree there. New York is described in great detail throughout the story and the reactions of its people make up a large part of the book. Hysteria mounts throughout the story causing the tension to rise. At one point riots break out and mass hysteria sweeps the residents of New York - and although this may sound incredible at first, I can actually understand it. I likened it to the similar hysteria which broke out in the wake of the Jack the Ripper murders during 1888. 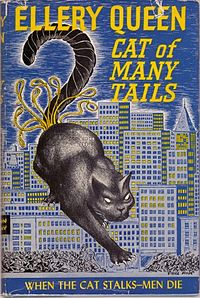 As to the actual characterizations, I cannot say too much since I have not read any of the Ellery Queen books. I have read others say that Ellery began as a bit of a snob akin to Lord Peter Wimsey or Philo Vance, but I didn't see any example of that in this story. Ellery and his father seemed like two very likable, if rather rough-around-the-edges characters. The only character who I really did not like in this story was a young newspaper reporter who becomes a major character doing some work for Ellery throughout the story. He got on my nerves endlessly and I cannot see what the leading lady of this story was supposed to see in a character like him.

Aside from that one gratingly bad character, there wasn't too much else which I didn't like about this story. My only problem is I don't know if I can really consider this story a mystery. In my mind there is a distinct difference between a mystery and a story where a detective appears. While the book was very enjoyable and did indeed have elements of mystery in it, there was no way that I could have solved this story myself. The solution to the book hinges on the psychology of the murderer, so this wasn't what I would call a fairly clued mystery novel. This could be somewhat disappointing since Agatha Christie's "The ABC Murders" also told about a serial killer bumping off seemingly unrelated people, but this was a fairly-clued story, with an enjoyable twist.

As an aside, I'd like to point out that the characterizations of Ellery and his father in this book are different than those in the '70's television series and while this wasn't a complaint, but something I did have to get over when I began. Ellery Queen of the television show was a bumbling yet lovable, slightly geeky, investigator. I didn't get that vibe at all. Instead, Ellery was far more refined here and much more humane. Ellery's father was also a bit more rugged than in the show, but nonetheless he was a nice character who I warmed up to.

In all, "Cat of Many Tails" made for a fine introduction into the world of Ellery Queen. I really enjoyed the book as well as the mounting tension and suspense. I would have preferred if this was a more fairly-clued mystery and that the solution didn't rely too much upon psychology. Nevertheless, this was a very well-done novel which I give 4 out of 5 stars. "Cat of Many Tails" is by no means my last Ellery Queen novel. I do have a suspicion of what book shall be next, but do you have any recommendations? I'd be very interesting in hearing any opinions.
Posted by Nick Cardillo at 3:49 AM