Review - "Doctor Who: The Rings of Akhaten" 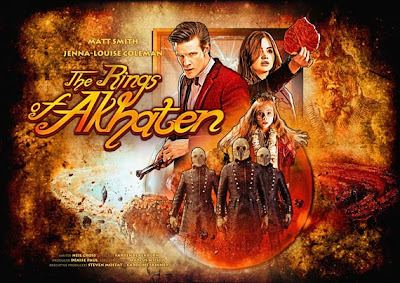 Warning: If you have not seen this episode, make sure that you do so before continuing this review as it will contain spoilers.

Season 7 Part 2 has surely continued with style and great flair in "The Rings of Akhaten." After Clara (Jenna-Louise Coleman) wishes to see "something awesome," the Doctor (Matt Smith) decides to take her to the Festival of Offerings on the titular Rings of Akhaten. However, things don't go exactly as the Doctor planned when Clara runs into a little girl named Merry who has been chosen as the Queen of Years who shall be sacrificed to the ring's god. Can the Doctor save her in time before the god awakens...?

I for one didn't quite know exactly what to expect in this episode. It wasn't exactly the episode I was looking forward to most, but it did have some interesting looking scenes and the promise of plenty of aliens seemed interesting. Well, I certainly wasn't disappointed during this episode - it exceeded my expectations dramatically. While it did take a little while to truly get going, once it did I thought it was very well done. It was nice that we got some more background on Clara, although we are still no closer to discovering who she is and how she could have survived in two different forms.

Matt Smith was wonderful as usual in this episode - he didn't have a great deal to do in the episode's beginning, but as the story progressed he was up to his usual tricks as always. What's more, Matt Smith is given two brilliant monologues in this episode. The latter of which, as he is confronting the god of the episode, is positively brilliant and really gave me chills. Also to see the Doctor shedding a few tears is rather jarring and isn't all that common in the show. However, the real acting chops have to be given to Jenna-Louise Coleman who really stands in this story. She occupies the episode's middle and she really shows she has the potential to be a great companion. I have a feeling by next week's story, she will be firmly routed in her character and we can continue proper.

As I stated above, the episode does take a while to really get going. Despite an interesting flashback, the first portion of the episode is a little padded and the banter between the Doctor and Clara falls a bit flat. In addition, the "mummy" of the episode really doesn't have a whole lot to do. While touted throughout teasers for the season, the "mummy" doesn't do anything more than roar and break some glass before it goes away. That is an underused monster if there ever was one. It would have been nice if this creature actually had more bearing to the plot other than foreshadowing the arrival of the ring's god. In addition, those strange creatures which can be glimpsed on the episode's poster (see above) were extraordinarily underused when they had so much potential.

Well in all, "The Rings of Akhaten" really did exceed my expectations. Jenna-Louise Coleman continues to prove herself a worthy TARDIS traveler and Matt Smith is still at top form. Combining some nice cinematography with good writing, this episode was actually quite, quite good. I award it a 3.5 out of 5.

Coming Next Time: After 39 years, the Ice Warriors return in "Cold War" (Click here for a little teaser)
Posted by Nick Cardillo at 6:41 AM