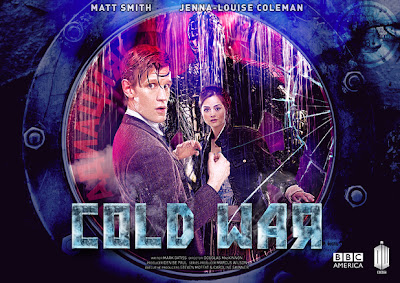 Warning: Again this review will contain spoilers, so take heed before continuing.

Of all the episodes in Season 7 Part 2, I was perhaps looking forward to "Cold War" most of all. This episode would reintroduce the Ice Warriors, a Doctor Who monster which had not been glimpsed in more than 30 years. And what's more, it was being written by Mark Gatiss, who has written some of the best episodes of NuWho. So, does it live up to my high expectations?

It's 1983 - the height of the Cold War. The TARDIS arrives on a sinking Soviet submarine carrying two nuclear weapons. The fact that the Doctor (Matt Smith) and Clara (Jenna-Louise Coleman) could drown to death seems to be the least of their problems since a creature known as an Ice Warrior is loose on the sub, and is prepared to do anything to reunite with his lost race. Can the Doctor save the crew members on the ship - and prevent world destruction?

I suppose I should give you some background before I continue the review proper. The Ice Warriors made their first appearance in the Second Doctor story, "The Ice Warriors" sadly lost today due to the BBC's junking policy. Since then, they only appeared three more times, but have remained a favourite of fans and criminally underused. Seeing their return was very exciting and it was made even more so since Mark Gatiss was handling the story. Gatiss is one of my favourite writers for television, having contributed greatly to Doctor Who and Sherlock. Gatiss was also the host of a BBC documentary special "A History of Horror," and it's evident that a love of horror films has had a great impact on Gatiss' writing.

"Cold War" was a very entertaining episode, and it certainly met the high expectations I had had. The script is filled with great suspense and tension and the claustrophobic atmosphere of the nuclear submarine is superb. This story is perhaps a much more low key story, relying only on the suspense which can be created from the monster among the group of people. This would be a rather unoriginal idea, but having it set on a sinking submarine is original. The star's performance keeps the suspense going as well. Both Matt Smith and Jenna-Louise Coleman are great. By this time, Clara has been firmly rooted as a character. She is a key member of the TARDIS team now.

Sadly, the episode was not perfect. Guest star, David Warner, is rather underused in this story. Warner is a great actor, but I felt like he didn't have a whole lot to do in this story. And am I the only one who found it a bit jarring to have David Warner listening to Duran Duran's "Hungry like the Wolf?" That's beside the point though. Anyhow, I also felt like the solution was perhaps a bit rushed. There was a lot of brilliant, suspenseful build-up to the climax and then the Ice Warriors sort of just fly away and that's it. Clara convinces the creature not to kill them and it complies. This was surely an underwhelming ending to a great episode.

Luckily, I'm able to overlook the last few of the episode because frankly the rest of it was great, creepy, suspenseful entertainment. Matt Smith and Jenna-Louise Coleman were great and guest star David Warner was able to do the best with his somewhat underwritten part. Of the second part of Season 7, I nominate "Cold War" as the best episode thus far. I award it 4 out of 5 stars.

Coming Next Time: Whose afraid of the dark: (Click here for a teaser for "Hide")
Posted by Nick Cardillo at 6:39 AM