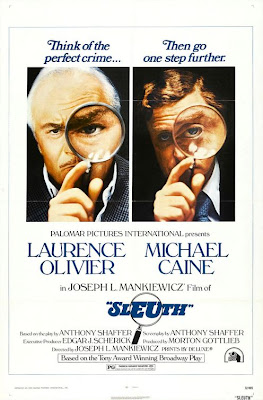 There are lots of tributes to the mystery genre. Some of them are good - some are less than wonderful - and some are quite bad. Nevertheless, every once and a while there's a tribute which is extraordinarily enjoyable and even flip the genre on its head. That's what 1972's "Sleuth" successfully does, making it a real treat to fans of mysteries and a good old fashioned thriller.

Laurence Oliver is Andrew Wyke, a mystery novelist known the world over. He has invited a young man named Milo Tindle (Michael Caine) to his stately manor in the country since Milo wants to run off with Andrew's wife. Surprisingly, Andrew gives his consent and even goes as far to stage a fake robbery so Milo and his wife can run off together with a good deal of money. However, Andrew double crosses Milo, pulling a gun on him and shooting him dead. And that's when things really heat up...

I won't divulge any more of the plot of this film since it is such a treat to be surprised. "Sleuth" is based off of Anthony Shaffer's Tony award-winning play, and it's quite evident in the film. The entire movie has only one setting and two characters. Everything is based off of these two men's performances but they carry it off brilliantly. Both Laurence Oliver and Michael Caine were nominated for an Academy Award for their roles in this film, and I really think that Oliver deserved it. While Michael Caine is good, he is rather out-shined by Oliver, who is tremendous. He carries off the role of Andrew Wyke brilliantly, bringing to life what can happen when we mystery enthusiasts go off the deep end. "How would you like to be found dead," Andrew asks Milo, "Slumped over a desk like so many colonels in so many studies or propped up in a log basket like a ragdoll? Which do you fancy early Agatha Christie or vintage S.S. Van Dine."

As a said above, in addition to be a beautiful homage to the mystery genre, "Sleuth" is a taught and suspenseful thriller. The deadly game which Andrew and Milo indulge in is brilliant, and with each passing moment the tension builds. I think that because the movie is done in a very theatre-esque style, this adds to the level of suspense and intrigue, as you imagine yourself in a live audience watching this unfold before you. I was actually lucky enough to see this show performed at a local theatre a few years ago, and it made me want to track down this famed movie version.

To the best of my knowledge, the movie is not available on DVD. However, at the time of this writing, the entire movie has been uploaded onto YouTube. I am not advocating piracy on this blog, but I do highly recommend jumping at the opportunity to see this fine, fine movie (if you don't mind what I believe are Russian subtitles). "Sleuth" receives a 4.5 out of 5 stars!
Posted by Nick Cardillo at 3:56 AM