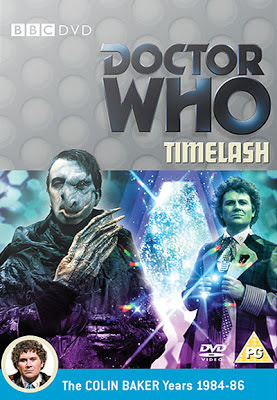 Back on 1 March when I reviewed "The Two Doctors," I wondered if I could survive "Timelash," the next Sixth Doctor adventure which has a reputation for being quite, quite horrid. Well, since it's been over a month, I assume some of you believed that I had not survived the Timelash. Well, I did, and after days and weeks of procrastination, I've finally gotten around to formally reviewing it.

The TARDIS becomes entangled in a time corridor. When the Doctor (Colin Baker) and Peri (Nicola Bryant) emerge unharmed, they find themselves on the planet Karfal. What at first seems like a peaceful planet is anything but since the planet is ruled by an evil dictator known as the Borad. When Peri is kidnapped, the Doctor is sent on a mission to recover a princess who has disappeared through space.

On a whole, the premise of "Timelash" isn't all that bad. The planet being ruled by an evil dictator is hardly new, but it's done in an interesting way here and the band of resisters is reminiscent of some of the earlier Doctor Who serials. In addition, Colin Baker is still in top form as the Doctor. He's a bit colder and meaner here than in the past - perhaps that's because he's been separated from Peri and therefore there is no one to melt the Doctor's heart(s) of ice. Nonetheless, Colin Baker shows that the Sixth Doctor is a pretty smart guy, and dabbles in a bit of inventing as the story progresses.

While we're looking at the positives of this story, I would like to point out the Borad in particular (whose visage is clearly seen on the DVD cover seen above). At a time when the special effects and makeup for the show were at an all-time low, the Borad actually appears to be quite menacing and extraordinarily evil. However, there isn't much more that can be truly considered "great" or "above average" in this story. While the concept of the Doctor meeting H.G. Wells and inspiring him to write "The Time Machine," is an interesting plot development in this story, it really doesn't go anywhere and doesn't stand up well when the idea is examined in more detail.

The acting (aside from Colin Baker and Nicola Bryant) isn't all that good in this story. It's dreadful, but certainly nothing fantastic. On a whole it's only mediocre. Much like "Mark of the Rani," I found this story to simple be mediocre. It's not that it is bad, but I simply wasn't impressed. Would I say that this serial deserves the title of worst Doctor Who story - no. Would I say that it is the weakest story from the show's 22nd season thus far - yes indeed. It's just an average, rather forgettable story and I really cannot say much more than that about "Timelash."

Coming Next Time: I have a bit more to say about "Revelation of the Daleks"

Notes: The idea of H.G. Wells travelling through time and space is actually a great idea. Since he wrote some of the most famous science fiction stories of all time, I feel like having Wells as a central character in a science-fiction story is grand. While "Timelash" isn't exactly the best example this, I willingly recommend "Time After Time." Written and directed by Nicholas Meyer ("The Seven-Per-Cent Solution"), this 1979 movie finds Malcolm McDowell's Wells travelling to present day San Francisco to catch Jack the Ripper (David Warner) who has escaped authorities in Well's time machine. It's a fun, creepy and very entertaining film.
Posted by Nick Cardillo at 9:55 AM