The Immortal Sherlock Holmes - The Verdict 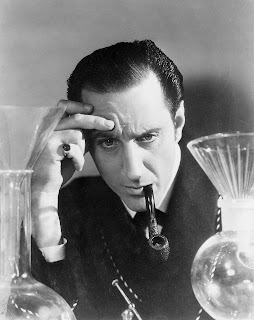 The votes are in and have been counted. You, the people of the Internet from across the world, have voted on who you think is the Immortal Sherlock Holmes. I have already looked at the three candidates in depth, and those three pieces of analysis can be found on this blog.

Anyway, the results have been up for a few days now, so I'll just give my feedback. I must say that I was rather surprised. Jeremy Brett had had the lead for quite some time, and at the very last minute Basil Rathbone swooped in from underneath and won by two votes. To the nine people who voted, I thank you.

Do I agree with your sentiment - I don't really know. Basil Rathbone was one of my very first Sherlockian encounters, so he does hold a special place in my heart. Nevertheless, when I pick up a pastiche or re-read one of Doyle's stories, Rathbone is not the face who I imagine. To be perfectly honest, I cannot describe the face of the Sherlock Holmes who I imagine. It's perhaps a strange hybrid of some of the greats. Together, they are all added together in the blender which is my mind and produce the ideal characterization. I think that Basil Rathbone was wonderful as Holmes. In his first few films when there was still a challenge to playing the detective, you could tell that Rathbone was on top of the world and having so much fun with it. That's why I cite the two films that Rathbone made at 20th Century Fox as superior to the one's at Universal. While they're all great, "The Hound of the Baskervilles" and "The Adventures of Sherlock Holmes" present us with an actor who looks like he is having a fantastic time playing the role of the detective.

When Basil Rathbone and company moved to Universal Studios, it became obvious after a while that Rathbone lost interest in the part of the detective. His last few turns as Holmes are very dull and he cannot breathe any life in the stories. I cite "Pursuit to Algiers" as a case-in-point. An already painfully slow and dull story, this film could have been saved if Rathbone was in top form as Holmes. However, Basil Rathbone walks through the part, making the movie seem as though it's twice as long as it should be. But, really who could blame Rathbone? He had been playing Holmes almost non-stop for six years. He needed a new challenge - something to actually stimulate him. He of course found that when he returned to the stage and won a Tony for his role in "The Heiress."

Before I talk about some of the others, I wanted to point out one in particular. Thanks to TomCat, who was the only person to answer the question I posed to those taking the poll, I can sum up the brief but impressive turn of Ian Richardson as Sherlock Holmes. I have written before of how vastly underrated Ian Richardson is as Sherlock Holmes. His performance is quite brilliant and he really dominates every scene in which appears. Much like Rathbone, he looks like he's having such a grand old time playing Holmes, even when's caught in the midst of some ludicrous situations (i.e. wrestling the pygmy in "The Sign of Four" or grappling with the hound in "Hound of the Baskervilles). Richardson is an overlooked star, and his two films - though flawed - are great fun for any Sherlock Holmes fan who has not yet discovered them. If you can track them down, I highly recommend both of them just for the pure entertainment value which they possess.

Incidentally, Richardson had a wonderful career aside from Sherlock Holmes. He is perhaps best remembered by audiences today as playing Francis Urquhart, Chief Whip of British Parliament in the immensely successful "House of Cards" series. I confess that I have never actually seen the series in its entirety, however from what I have seen, Richardson is fantastic, cheekily addressing the audience, letting them in on his evil schemes. Richardson is also well remembered for (oddly enough) mustard. Take a look!
https://www.youtube.com/watch?v=zmOHeWrr9V4 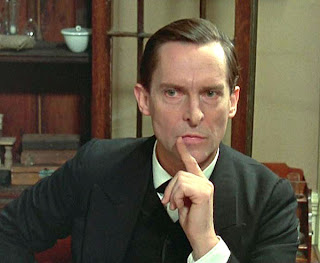 Lastly, but certainly not least is Jeremy Brett. Brett was winning in the poll for some time, which honestly did not surprise me. I think to fans of the canon, Brett is the epitome of Sherlock Holmes. No one before him had gone to such lengths in order to recreate the character so vividly. Jeremy Brett portrayed the character brilliantly - to a point. In my mind, "The Adventures of Sherlock Holmes" (1984) is perhaps hallowed ground. It is some of the finest Sherlock Holmes material I have ever come across, and I honestly cannot find any flaws with it. It's only in the later series do we see Brett's illnesses really begin to take a toll on him, and the quality of his scripts plummet. Take for example, "The Mazarin Stone" from "The Memoirs of Sherlock Holmes." Surely one of the more weaker stories, the Granada series decided to ignore a great deal of the plot and shoe-horned in the plot of "The Three Garridebs." Oh - Jeremy Brett is only in that episode for about two minutes. It's quite sad how far the Granada series sank in just a few years.

In all, I think it is quite interesting to see where Sherlockian's hearts lie. Perhaps someday to get a non-biased opinion, I'll conduct an experiment showing Basil, Jeremy and Peter side-by-side-by-side to a group of people unfamiliar with the three to see who chooses the most Sherlock Holmes-esque. But that's for another time. Until then, Basil Rathbone still reigns supreme here on the Consulting Detective.
Posted by Nick Cardillo at 3:46 PM