The Rise of the Hardboiled Detective and Film Noir

Perhaps it's not exactly the best thing to do, but I have always grouped the hardboiled detective and Film Noir together. Perhaps this comes from the fact that the stereotypical hardboiled detective really emerged during the Film Noir era when books such as "The Maltese Falcon" and "The Big Sleep" were first released.

To be frank, Film Noir was never really may favourite genre. It has recently grown on me, and I find the films of the time to be enjoyable in the extreme. Does that mean I like everything which has emerged in the Film Noir genre - good heavens no! I don't like everything which has been released in the Sherlock Holmes sub-genre. However, since I find the concept of the hardboiled detective and Film Noir to be fascinating I thought it would make for a nice introduction to my my new reviews of the mystery genre on a whole.

When I was first introduced to the concept of the hardboiled detective, I was not truly a fan. In my mind, a true detective belongs in a "fair play" mystery where they are gathering the clues together and eventually expose the murderer in the final chapter. So imagine my surprise when as a young lad, I found "The Maltese Falcon" and discovered this story featured very few of the characteristics of my preferred mysteries. I tried to cling to these preferences when I decided to try a Raymond Chandler novel. I decided to opt for "Lady in the Lake" because it was supposed to be the most Agatha Christie-like Chandler novel. To put it mildly, I was disappointed.

I'm inclined to agree with the general popular opinion that Chandler is a good writer. He managed to get the tough side of Philip Marlowe, his detective, across, but maintaining a likability about him. Even though Marlowe would not be a person I'd like a great deal if I met him tomorrow in a shop, I cannot help but think that Marlowe is a really good guy. But aside from Chandler's descriptions and characterization, I cannot really say that the rest of the story was all that good. To be perfectly honest, it was actually quite forgettable. I have not yet read "The Big Sleep" or any of Chandler's other work, since I have heard many conflicting opinions about his novels. I'm also not too keen on reading a book where even the author didn't know who committed one of the murders. Call me crazy, but I feel like the author of a mystery novel should know the outcome of his book.

While the works of Raymond Chandler may not be my cup of tea, that doesn't mean I put down all things in the Noir genre. In fact, I have made it a point to track down some of the most famous Film Noir movies. What's nice about this genre is that the stories vary greatly. Under the umbrella of Film Noir we have such diverse films as "I Wake Up Screaming," "The Bribe," "Out of the Past" and "Sorry, Wrong Number." These are just a few off the top of my head, and three of those four made a great impression upon me. "I Wake Up Screaming" was probably my first real Noir film which I sat all the way through and liked immensely. While the plot is pretty straightforward and utilizes a number of Film Noir tropes, it's still a very entertaining motion picture. If you're looking for originality, "Sorry, Wrong Number" is the way to go. Barbra Stanwyck is wonderful as a bedridden woman, who when she picks up the phone, hears her husband discussing her murder to a hit-man he has hired. 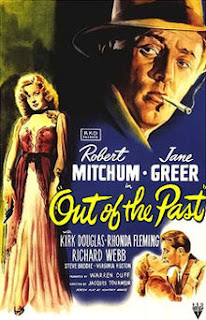 Some film historians debate over what is the best example of Film Noir, and while I cannot give a definitive answer, I can give my opinion to one of the more recent Noir films I've seen. "Out of the Past" (1947) is oftentimes cited as being the greatest Film Noir movie. Starring Robert Mitchum as a one-time gumshoe, he soon becomes involved with the woman he used to love (Jane Greer) and a dangerous crime boss (Kirk Douglas). "Out of the Past" features some of the classic tropes of the genre, but it makes the movie seem so enjoyable. Mithcum, Greer and Douglas are all brilliant in their roles and the film making is top notch. If you have any interest in Noir whatsoever or good film making, "Out of the Past" comes highly recommended from me.

There is honestly too much material to cover here all at once, so I hope to keep up with Film Noir in the future. My plans going forward with the hardboiled detective are somewhat vague. I have wanted to give Raymond Chandler his second chance, and perhaps get around to actually reading "The Maltese Falcon." I'll probably have much more respect for this classic film once I have read the book.

Notes: Another confession - I really got interested in tracking down Film Noir movies after I saw the 1982 comedy, "Dead Men Don't Wear Plaid." This very enjoyable parody of the Film Noir era features Steve Martin as a gumshoe and he is able to interact with some of the screen's most famous faces due to clever writing and some good editing. It's a very clever film for any fan of the films of the '30's and '40's.