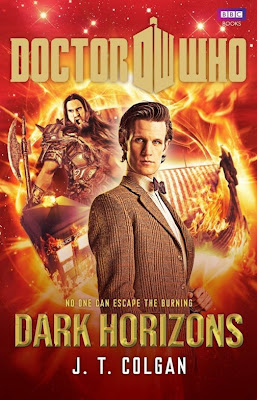 Despite the fact that I love "Doctor Who," I had never really gone beyond the television series or the Big Finish audio recordings. Finally, I decided to invest in some Doctor Who-related books and I started with "Dark Horizons" by J.T. Colgan which featured the Doctor as played by Matt Smith.

The Doctor arrives in the thirteen-hundreds and discovers he has more trouble on his hands than vikings. Arriving in a world that doesn't know what the colour blue is, the Doctor discovers that a small island community is being terrorized by flames - a fire which cannot be put out by water and seems to burn forever. What is it that is terrorizing this town and can it be stopped?

The premise behind "Dark Horizons" is a good one, and author J.T. Colgan is able to make the story very interesting. I had no idea what was causing the mysterious burning and the author is able to keep up that level of mystery. When the explanation does come halfway through, it's a perfectly suitable one and from that point on, the book comes a game of cat and mouse between the Doctor and a strange alien race. What's more, the book has a number of very dramatic passages, which are quite convincing. What in the wrong hands could have been laughably over-the-top, is restrained and quite exciting here. There are a number of scenes which take place on viking ships and under the water and this is all described in great detail.

The author's greatest success is the representation of the Doctor. There were times when I was reading this book when the tone and style matched Matt Smith's portrayal brilliantly and I could hear his voice reading in my head. There were also some hysterical laugh-out-loud moments provided by the writing, and I did have to suppress my laughter during certain portions of the book. On the other hand, Colgan was able to capture the sincere and very touching portrayal of the Doctor as well. The Doctor does not wish any harm to come upon the people of this book and he only wishes that he could get them out of their plight. While the book could be positively uproarious, there were some genuinely moving portions.

While the style of writing was for the most part well handled, it was not perfect. Some chapters opened with pages of unimportant details and it was quite jarring coming out of an exciting action set-piece. What's more, as the book progressed it did get rather long-winded and there were times that it seemed as though all of the action stopped and we are left with our characters standing around making small talk. These portions of the book become very repetitive very fast.

It would have also been nice to give this story some sort of placement in the Doctor Who universe. The Doctor in this story is travelling without a companion, so we are left to assume that this story took place after the events of Series 6, when the Doctor temporarily left Amy Pond and Rory, but that's never explained. Nor is the Doctor's presence in the 13th century. It's established on page one that he wants to play a game of chess, but why does his mind very naturally leap to the 1200's? I don't know, so I'll try to refrain from rhetorical questions.

All in all, "Dark Horizons" was an enjoyable book and in retrospect I am very glad that I read it. It has made for a great new jumping on point for more Doctor Who novels and only the other night I actually bought three more in this same series which features Matt Smith as the Doctor. Keep a look out for them coming in the future. I would give "Dark Horizons" a 3.75 out of 5 stars.
Posted by Nick Cardillo at 7:22 AM