Review - "Doctor Who: Journey to the Centre of the TARDIS" 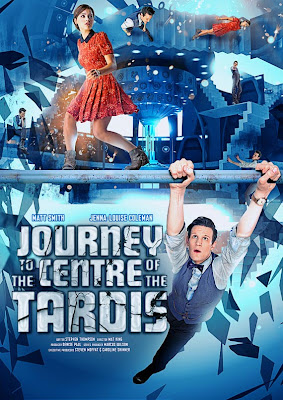 Warning: This review will contain spoilers. If you wish to remain surprised, make sure you see the episode before continuing

With a title like "Journey to the Centre of the TARDIS," the episode sounds like a wild ride. It was promised that we should be able to see more of the Doctor's craft than ever before. Is this true? Does the episode live up to the fantastic title?

The Doctor (Matt Smith) and Clara (Jenna-Louise Coleman) find themselves in more trouble than ever before when the TARDIS is captured by a salvage vessel. When Clara goes missing, the Doctor has only thirty minutes to find her and save the most valuable space ship in the universe.

"Journey to the Centre of the TARDIS" was written by Steve Thompson. Thompson wrote the sixth series episode "Curse of the Black Spot" which I like, despite the overwhelming distaste for the episode. He also penned "The Reichenbach Fall," the series two finale of "Sherlock." With some pretty good credits under his belt already, I was looking forward to his treatment of this story. On a whole, it was quite good. The episode was handled well - the best element was the suspense factor. The fact that the Doctor only had thirty minutes to search through the entire TARDIS to find Clara was great. In addition, the monsters of this episode (yep - this episode's got monsters) were very creepy. We only see fleeting glimpses of them throughout the story which makes them even more disturbing.

As for the actual TARDIS, it was sort of a mixed bag. Much like Series Six's, "The Doctor's Wife," we see a lot, a lot of corridors, some hallways and a few more corridors. However here it works out well. It manages to make the TARDIS feel gigantic which is how we're supposed to feel I suppose. There were a few treats or fans such as an observatory, the much-fabled swimming pool and a magnificent-looking library. The Eye of Harmony, which played such an important role in the Doctor Who 1996 T.V. Movie, also plays a very important part here and if you listen closely you could hear Ninth Doctor Christopher Eccleston's voice in one scene. 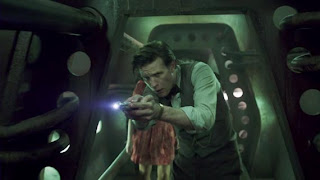 As for the acting, Matt Smith was great as usual. He handles all of the Doctor's wide-ranging emotions well throughout the story. My only complaint with the Doctor's character here is how he bounces back and forth with his emotions throughout the story. One minute he's lost his cool and the next he's calm and collected. Jenna-Louise Coleman is great as Clara. She really is a wonderful companion, and certainly one of the very best. The guest stars of this episode weren't bad. I didn't feel very connected with them and aside from luring the TARDIS to their junk ship, they didn't have a whole lot of bearing to the plot. On the plus side, the cast was small so we get a lot of Doctor and Clara interaction - which is welcome since next week's episode is probably going to be Doctor and Companion-lite.

To recap - "Journey to the Centre of the TARDIS" was a good episode. I wouldn't say it was spectacular and could have perhaps given us a bit more to see of the TARDIS. The suspense and horror elements were handled wonderfully and Matt and Jenna were great as always. I would award this episode a well-deserved 3.75 out of 5 stars.

Coming Next Time: Madame Vastra, Jenny and Strax return to save the day - and the Doctor in "The Crimson Horror" (Click here for a teaser)
Posted by Nick Cardillo at 5:05 AM